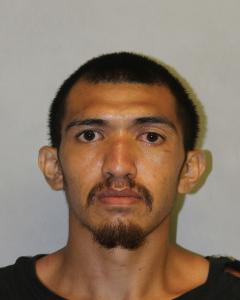 Hawaiʻi Island Police have arrested and charged a 23-year-old Kurtistown man with multiple offenses after he assaulted a 67-year-old man and attempted to steal his vehicle.

The suspect is identified as Trinton Chavez Canon, of Kurtistown.

On Friday afternoon (June 26) at approximately 3:20 p.m., South Hilo Patrol officers responded to the entrance area of Hilo Medical Center for a report of a pedestrian being struck by a vehicle. Upon officer’s arrival, they learned that the victim and his wife had initially seen Canon lying on the side of the roadway in Hawaiian Paradise Park. He appeared to be in need of assistance. The couple checked on Canon and ended up giving him a ride to the hospital in Hilo. The victim and his wife exited their vehicle and the female went to contact hospital staff to assist Canon. At that point Canon crawled from the rear seat of the vehicle into the driver’s seat. The victim attempted to stop Canon as he put the vehicle in drive and started to drive away with the victim’s vehicle. The victim was dragged a short distance before he and a hospital security guard were able to stop the suspect.

Police would like to caution the public from giving rides to people they are not familiar with. If someone needs immediate assistance it is best to call 911.

Police ask anyone who may have witnessed this incident to contact Detective Blaine Morishita at (808) 961-2385 or via email at blaine-morishita@hawaiicounty.gov or call the Police Department’s non-emergency line at (808) 935-3311.

Keep an eye out for monk seals

Keep an eye out for monk seals

‘They can’t control their fear’; July 4 fireworks displays can be life-threatening for livestock and pets