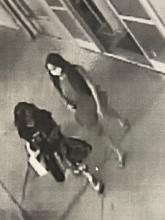 Hawai‘i Island police are asking for the public’s assistance in identifying two women who stole a shopper’s backpack from the men’s section of a discount department store in Kona on February 20, 2021, at 12:30 p.m.

The suspects took a blue, orange, and grey backpack containing identification cards, Bank of Hawaii cards, and $400 dollars in cash while the rightful owner was shopping.

Police ask anyone with information regarding this investigation to call Officer Patrick Robinson in Kona Patrol at (808) 326-4646 ext. 253 or call the police department’s non-emergency number at (808) 935-3311.

HPD: Officers Shot Man After Home Invasion, Assault On Officers..Police said the man entered a home, sat down and took off his shoes before returning to his car and initiating a violent assault on officers who responded.

On the Scene with Miss Hawaii Volunteer Teen Sophia Stark

A Guy On Twitch Playing Guitar For Zero People Had His Stream Raided By Crypto People, Ends Up With Over $85,000

‘We Keep Trying’: Hawaii Sees Spike In School Absenteeism Due To The Pandemic…The challenge of this year is reflected in new statewide data showing 20% of Hawaii’s students are at “high risk” for chronic absenteeism.